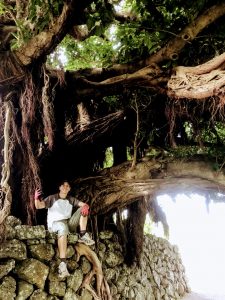 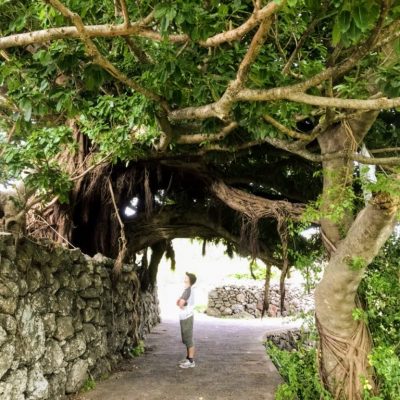 I bought this 200 year old Ako tree in Goto, Japan.I think most people in Goto don’t know about it, but there is a huge Ako tree (ficus superba tree?) in my neighborhood. Similar trees in Goto have been designated as special “cultural heritage sites” and preserved as sightseeing spots. This one is just a 2-minute walk from home and on the route I take when walking to my school. For me, it’s a rather mysterious power spot in my neighborhood, Ohama.

One day at the end of last year, as usual, when I was walking home for lunch, I passed under this huge tree. But, there was the sound of construction work, the workers were using a hydraulic claw-excavator-type machine to rip branches from the tree. WHat!? Needless to say, I was shocked by the change from serenity to destruction.

I quickly talked to the workers and found out that they were hired to demolish the house, sheds, and Ako tree on this property. They said that they were planning to remove the entire tree and turn this land into an empty vacant lot at the request of the owner.  WHY!? After 4 years of walking under this magnificent tree with it’s hanging “aerial” roots, it was impossible to believe that someone was going to chop it down.

I immediately talked to a neighbor who lived nearby. She also didn’t want the tree to be removed, over 60 years ago she played in this tree as a child and now the huge tree protected her nearby house from strong winds during the typhoon season. I asked her to contact the owner and see what could be done about saving this tree.

However, the owner has been living in Aichi prefecture for the last 10 years and has no plans to return to Goto. He can no longer take care of the tree or the house and property. Moreover, he already signed a contract with this demolition company. Even though we offered to take care of the tree on his behalf, he said “it was too late.”

But even so, I asked for the contact information of the real estate agent in Aichi prefecture who was in charge of this soon-to-be “empty lot.”  He has never been to Goto, never seen this tree, so he was probably confused why a foreigner was calling about it. Likewise, he let me know that it was “too late to do anything about the tree” and “If you want to buy the vacant lot, please contact us again in a few months.”

I couldn’t sleep well that night. The next day, I still couldn’t accept that this tree was going to be chopped down. I wanted to talk directly with the president of this demolition company. The workers on site had agreed to stop demolishing the tree and focus on the olds sheds for the next few days. I asked one of the workers if they could arrange for me to meet with the president of their company.

The president agreed to meet and he ended up being an incredibly kind person who understood the value of this Ako tree.  He too believed it was unfortunate to cut down such a rare tree. Even though he had already signed a contract with the owner, he said that if I was willing to buy this tree, he would renegotiate the contract and essentially return this money to the owner. For two days in a row, I was shocked. This time by the kindness of the company’s president who, after a few seconds of reflection, was willing to cancel a contract and return thousands of dollars that he had a right to collect.

Armed with new information and a new ally.  I contacted the real estate agent again, maybe it’s not too late after all. “I’d like to buy your tree.”  We made a new contract, and it took a long time to negotiate and complete procedures, registration etc. However, last Thursday I was able to successfully buy this tree. Along with it came the 220 tsubo (730 sqm) of land that surrounds it as well as a VERY old Japanese-style “kominka” house that the owner had abandoned when he left Goto.

If I hadn’t walked home for lunch on this day, this tree would have disappeared within the next 72 hours. It’s sorta weird to say that I feel “connected” to a tree but it’s true. I’m happy to say that from April 8th, 2021 I became the owner of this Ako tree and I plan to take responsibility for protecting it. Some day, I hope it’ll also be registered as a natural “cultural heritage” of Goto. 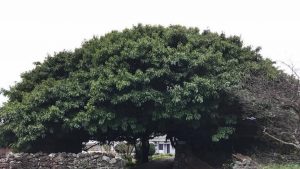 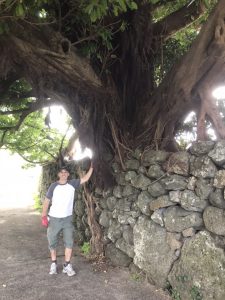 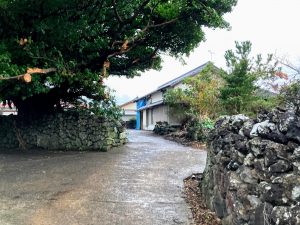 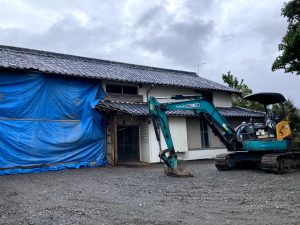 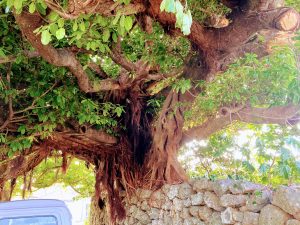 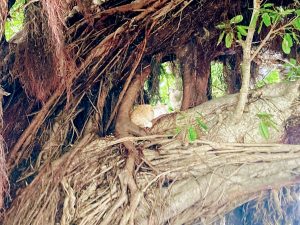 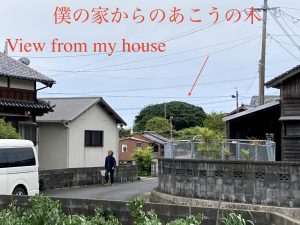